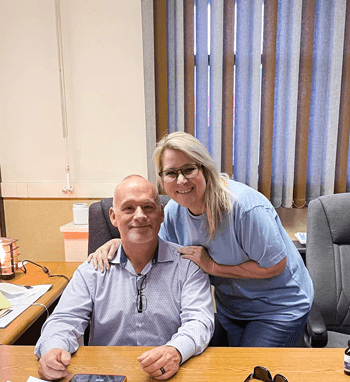 I have limited memories of that day. I had just buried my mother the day before and I was driving home down a back road in central Kansas. I was approaching a sweeping right-hand curve in the road. When I got to the curve my car went straight out into a field at an extremely high rate of speed. My car began to flip and roll, and I was ejected out of the glass roof. Fortunately for me, there was a couple traveling on the road that witnessed the accident. The lady just happened to be from the Red Cross and was able to provide immediate assistance until EMTs arrived.

My left foot was facing backwards, and the skin on my forehead was peeled all the way back like a sardine can. I was taken by ambulance to the closest hospital which was about 15 miles away. From there I was flown to Wichita, Kansas, and taken directly to surgery.

I do not remember anything over the next 2 weeks except for horrible hallucinations. One of the hallucinations included me standing back away from a casket in a funeral home, my siblings were all standing beside the casket looking into it, they were looking at me in the casket. When I woke up, I was scared out of my mind. I had no idea where I was or what had happened. As I slowly began to understand where I was, and people told me what had happened, the fear inside me began to compound.

I was released from the hospital on January 1st, 1997. At this point, my fear and anxiety were continuing to mount. I was scared that I was going to die, and my short-term memory was still an obstacle that I could not gain control of.

As a police officer, I struggled with trying to figure out what had happened from my law enforcement training point of view, but I was not able to put the pieces together. Being on the opposite side of all that I had seen and dealt with, it was very frustrating that I could not make the details fall into place to understand what had happened during the accident.

I was unable to continue my career in law enforcement due to constantly being afraid of the unknown along with the primary focus on my ankle that would not seem to heal. My short-term memory loss caused me to question how I was going to survive and pay bills, the fear of having to start over in a different job field had me trying several different jobs within the City Departments. Being a police officer is all I had wanted to be, so I did not know where to go from here. Before long, I found myself divorced and returning to Denver in an attempt to find a new career path.

It took several years to rebuild my confidence, during that time I read a lot of books and put to use the knowledge learned to rebuild my confidence. I am currently reading a book by Michael A. Singer titled The Surrender Experiment; My Journey into Life’s Perfection which has continued to give me insight into understanding the “why’s” and moving forward on my journey. My short-term memory is still to this day affected by my closed head injury. I get frustrated very easily, and I have a tough time concentrating. I have vertigo most of the time so my balance is still affected, but I have remarried and moved my new family to North Platte. Since moving to North Platte, I’ve had the opportunity to begin assisting others in planning for their future through our business with 5 Rings Financial.

I am extremely thankful to be alive today. If you know someone that has had a brain injury, have patience with them. They might be fighting a battle that you do not fully understand.

Thank you for letting me share my story with you.