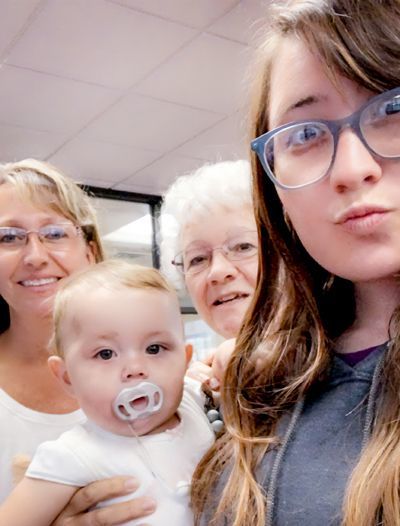 Looking at my 16-year-old daughter laying on a stretcher with a neck brace on was scary, but I had no idea how much our lives would begin to change from that moment on. My daughter, Kristen, was a fun-loving teenager who was carefree, big-hearted, and loved to tell jokes. Sure, we had our moments of butting heads and her pushing the boundaries, but nothing outside of normal teenage rebellion. A car from out of state ran the red light and t-boned her car. Her head slammed against the driver’s door window, and she lost consciousness. The passenger stated it took several minutes to arouse her so they could open the driver’s door to get out of the vehicle. The Emergency Room department diagnosed Kristen with a mild concussion and sent us home with directions to come back if she experienced excessive drowsiness, confusion, or vomiting. There was no mention of watching for vision issues, ringing in the ears, sleep disturbances or any indication that she could face an extended recovery period or that it may take time for other symptoms to appear.

Looking back, I realize I did not pay attention to the timeline, but several weeks after the accident, my daughter began complaining about the lights in the classroom and the constant ringing in her ears. Her grades began to slip, homework was incomplete, and many assignments were not turned in. Kristen changed her group of friends and started smoking marijuana. She began skipping school and at one point even told the principal to leave her alone, in not so pleasant words, and walked out the front door of the school. At this point, the court system had become involved, her counselor was getting nowhere with her, and my marriage was suffering. With three younger siblings in the home, my son plus my two stepsons, my husband was becoming increasingly impatient with Kristen and her behaviors, which caused us to argue and added to my feelings of hopelessness. I reached out to the counselor and county attorney begging for help to find someone, somewhere, to help my daughter. Kristen was sent to a group home where she was seen by different professionals, the pieces were put together, and coping skills were developed so she could learn to cope with the short-term memory loss and mood swings left behind from the brain injury. After completing the program and graduating high school mid-term, Kristen returned home and enrolled in CNA classes to find employment at a nursing home. Before long she began spending time with her old friends, smoking marijuana, and pushing the boundaries at home. After an argument between us, she stormed out of the house demanding her freedom because she was 18 years old.

I got the call around 2:30 am that my daughter had been in a rollover accident and there was a fatality. I rushed to the hospital only to be told I would need to stay in the waiting room, for what seemed like hours. When I was taken to the trauma room, I almost did not recognize my daughter. She had a neck brace on and her clothes were ruined, but the look of wild fear that I saw in her eyes left me paralyzed. She had to climb over her friend’s lifeless body to get out of the car, she had seen more horror than anyone would want their child to see. Once she was released, with the standard concussion warning signs to watch for, we returned home where I held her for the next 10 hours while she tried to sleep but would wake up screaming and cling to me. Kristen struggled with headaches, depression, and memory loss but since she had the tools in place to help her cope, she faced each day with a positive outlook, until she felt that she could no longer manage the pain and succumbed to self-medicating with marijuana consistently. At that point, we lost Kristen. Over the next two years, she received three possession charges, spent time in jail, and was the complete opposite of the girl I knew four years ago.

After the third possession charge, the judge told her if he saw her again, she would be going to prison. This was a reality check, and she began to work on herself, cooperating with her counselor, and asked me to help her find a job. Eight years later, Kristen is still struggling with maintaining sobriety, but she has cut off those who do not support her decision. We work together to keep her calendar in order so she can remember appointments due to the short-term memory that she has not regained. She has a beautiful one-year-old daughter who keeps her pushing forward to be the best version of herself that she can be. Some days are harder than others, but each day after a brain injury is a gift and we see the positive in all the negative she has endured over the last eight years.